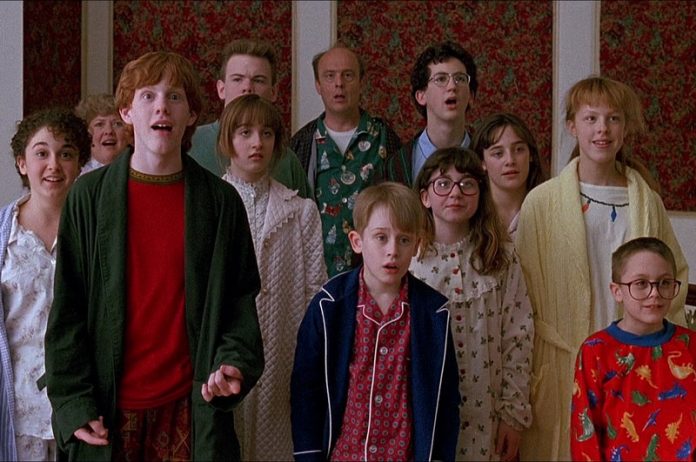 The Polar Express starts our top 10 Christmas movies list. The movie revolves around Billy (Hayden McFarland) who longs to believe in Santa Claus but finds it difficult to do so. With no belief from his family or word from the North Pole, he soon thinks Santa is a myth.

This all changes, however, when a mysterious train visits Billy in the middle of the night. The conductor promises to take him, and a group of lucky children, to the North Pole. The conductor, (Tom Hanks), and other passengers help turn Billy’s crisis in faith into a journey of self-discovery.

Next up is #9 on our top Christmas movies list. Love Actually follows the mystery that is love with a host of characters. The holiday season provides the ideal backdrop as prime ministers, widowers, best men, and even love-struck grade school kids take a stab at love.

Good Christmas movies are not always full of love and cheer. Sometimes being a drunk and exhibiting shady behavior are the norm.

Santa Claus is the best, and he has no faults…well, maybe just a few. Willie T. Stokes (Billy Bob Thornton) plays a Santa with more than an edge–he’s a thief. He teams up with his friend Marcus (Tony Cox), a little person, for a special holiday scam.

Mall manager Bob Chipeska (John Ritter) suspects something is slightly off with Saint Nick. The laughs and action are all in good holiday cheer, but this picture is for adults.

Chase and his gang are at it again but try to keep things simple this time. If you’re familiar with the franchise, you know that won’t be the case. Funny Christmas movies like this one are a gift on its own.

“Don’t expose him to bright light. Don’t ever get him wet. And don’t ever, ever feed him after midnight.” This sage advice is ignored midway through Gremlins with devastating results.

This Joe Dante film is set in a Norman Rockwell-esque small town during Christmas. Seeking a unique gift for his son, inventor (Hoyt Axton) purchases a cute and fuzzy little “Mogwai” from a Chinatown shopkeeper. A little bright light or water can’t cause that much of a problem, can it?

The situation grows out of hand before anyone knows what’s going on. This 80s throwback is one of our favorite Christmas movies to watch, and it’s available on Netflix.

We’re halfway through our top 10 Christmas movies list. Toy Story, The Incredibles, Shrek, and even South Park must pay homage to the Peanuts gang and its famous leader Charlie Brown.

Although he often faces tough obstacles and gets the short end of the stick–watch him on the pitching mound for proof–Charlie Brown gives 100%. The music is cool, his gang is hilarious (what’s not to like about Peppermint Patty addressing everyone sir or ma’am), and a teacher that no one understands. Can you say, Kenny?

When you want to watch one of the best Christmas movies old or new, Charlie Brown is a great pick.

Die Hard isn’t a top 10 Christmas movie in the traditional sense, but it is great movie to play during the holiday season. The movie does take place in late December and is loaded with fun, action, suspense, and an awesome ending.

What’s not to like? Bruce Willis has been in many movies in his long career, but none fire on all cylinders like this one.

#3 on our top 10 best Christmas movies list is Miracle on 34th Street. Edmund Gwenn (Kris Kringle) is a bearded old gent who is the living image of Santa Claus. Serving as a last-minute replacement for the drunken Santa who was to have led Macy’s Thanksgiving Parade, Kringle is offered a job as a Macy’s toy department Santa.

One of the store’s managers, Doris Walker (Maureen O’Hara), soon begins having second thoughts about hiring Kringle. (He tells customers to shop elsewhere for toys that they can’t find at Macy’s.) Just when you think he’s overstepped his boundaries a miracle saves the day.

One of the highest grossing Christmas movies ever, we don’t know anyone that doesn’t enjoy Home Alone. Audiences cheer for a young boy named Kevin (Macaulay Culkin) who is accidentally left behind when his family takes off for a Christmas vacation in France.

An annual favorite each year, popular Christmas movies like Home Alone get everyone into the spirit of Xmas.

Did you already guess which film got our top pick for best Christmas movies of all time? It’s A Wonderful Life has got it all: heart-warming, perfect storytelling, and nostalgia all in one.

George Bailey (James Stewart) has long considered himself a failure and due to a grave error at his bank, faces financial ruin and arrest. Seeing no way out, George considers suicide.

High above Bedford Falls, two celestial voices discuss Bailey’s dilemma and decide to send down eternally bumbling angel Clarence Oddbody (Henry Travers)–who after 200 years has yet to earn his wings–to help George out.

It’s good for all of us down here that Clarence arrived just in time–an inspirational classic.