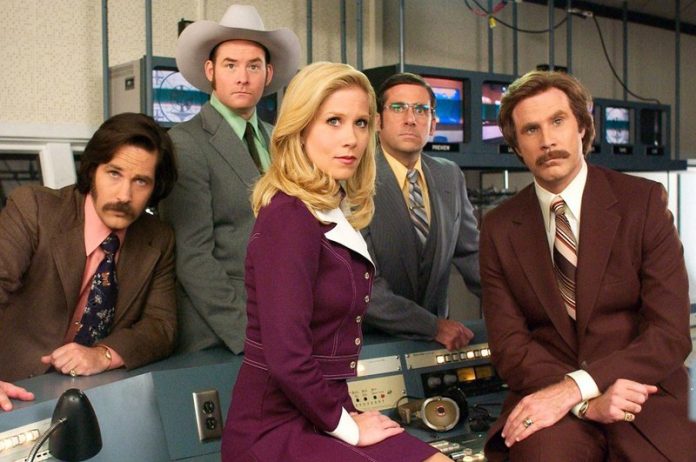 What makes Will Ferrell’s characters so funny? They’re all ridiculous and they all believe their own hype. And Ron Burgundy (Ferrell) is no different.

As the head newsman for a local television station, Burgundy is thrown a curve ball when he finds out that he will be getting some competition. The lineup change was made to increase ratings, but a certain individual doesn’t quite see it that way.

Anchorman earns the #10 spot on our top 10 comedy movies list.

These chaps will do whatever is necessary to win her heart. Ted confesses to his good friend Dom that he had one major regret in life: not hooking up with Mary when he had a chance to.

Dom convinces Ted to hire a private investigator friend of his to see if Mary can be found and a love connection rekindled.

An ensemble comedy about five young guys that are coping with the mysteries of life and women. Set in a cool and laid-back Hollywood environment, Swingers just feels right.

One of fellas, Mike (Jon Favreau), is having a hard time dealing with a recent breakup. All the guys go all out to get Mike back into the swing of things. Watching a young Vince Vaughn and Jon Favreau in action is great.

Although the Swingers comedy is not available to stream on Netflix, you can watch it on DVD.

90’s comedy movies that are this good are rare. Yes, there are some great ones from the decade, but with a cult following like Office Space? Not so much.

When a bunch of programmers learn that they will be downsized out of a job, they decide to rob their employer first. By creating a virus and uploading it to the company’s servers they will improve their financial futures significantly.

Of course, nothing goes as planned as the computer virus withdrawals too much money. In the end, Peter (Ron Livingston) gets a new job in construction, Peter’s boss Bill Lumbergh (Gary Cole) gets canned, and office dork Milton (Stephen Root) retires to an exotic island.

#6 on our best comedy movies list will make you split your side in laughter. Slapstick comedy and one-liners at their best. Seeking vengeance for the murder of his partner Nordberg (O.J. Simpson), Lt. Frank Drebin (Leslie Nielsen) searches for the man responsible.

The target is Mister Big–a heavy weight drug dealer. Drebin has a hunch however that the real culprit is shipping tycoon Vincent Ludwig. But Drebin can’t come close to proving a thing with the everyone working against him from the mayor, his own partner Ed Hocken (George Kennedy), and even Reggie Jackson who has been hypnotized to kill the Queen of England.

Halfway there on our top 10 comedy movies list with National Lampoon’s Vacation. Before the Will Ferrell’s of the comedy world there was Chevy Chase. Clark Griswold (Chase) becomes consumed with taking his family cross-country to Wally World–a California amusement park.

Less a vacation and more like a descent into hell. The family suffers through a series of catastrophes, culminating in a run-in with the law. But the Griswold’s give us one of the funniest movies of all time.

Robert Altman gives us nonstop laughs with this Korean War satire. Donald Sutherland, Elliott Gould, Robert Duvall, and a host of others provide the goods.

Nominated for five Academy Awards, including Best Picture and Best Director. Mash is anti-war, anti-religion, and anti-establishment. The theme resonated with movie goers as they swallowed whole the film’s vulgar yet suggestive humor.

The spinoff TV series was just as popular and ran for a more than a decade. MASH is one of the best comedies you can watch whether we’re talking 1970 or 2020 period.

#3 on our top 10 comedy movies list helped to make Eddie Murphy a movie star. Murphy was at the top of his comedic game during the 80’s, and one of his funniest movies was Trading Places.

Their curiosity gets the best of them, as their distinguished positions in life change for the worse. Going from rich to bankrupt isn’t good if you’re on the wrong side.

A hilarious backstage pass into the world of rock and roll. Rob Reiner wrote, directed, and starred in this this 1984 rock music mockumentary. Others responsible for straight faced laughs are Christopher Guest, Anjelica Huston, Billy Crystal, and Paul Shaffer.

Mr. Kubrick can do no wrong. Are you looking for one of the best war movies ever? He’s got you covered with Full Metal Jacket. How about a Sci-fi movie that defines the genre? 2001: A Space Odyssey. And, one of the best comedy movies of all time? Yes.

Stanley Kubrick pushes the envelope with his classic comedy movie. We see how far things could potentially go if the wrong person nuclear war power.

Written from a position of laughs, the satire comes to life with outstanding performances from Peter Sellers, George C. Scott, James Earl Jones, and Sterling Hayden. The movie is black and white and more than fifty years old, but the scenes are hilarious.

Funny movie lines like Major Kong’s (Slim Pickens) are the best, “Nuclear combat! Toe to toe with the Russkies!” And the full movie title itself–Dr. Strangelove or: How I Learned to Stop Worrying and Love the Bomb. Comedy movie perfection.

Do you agree with our top 10 comedy movies list?