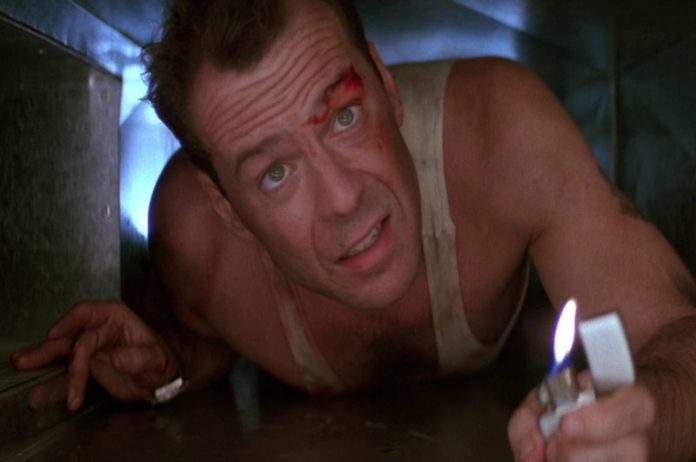 He’s no different than the average cop out on their beat – risking his life daily to protect others. But Frank is different from his colleagues in the morals department. But the good cop turns bad cop. At least in the other police officers viewpoints.

Serpico turned whistleblower and exposed the corruption taking place inside the NYPD. Pacino appears again on this list, but this is his most honest character portrayals.

Watching Robert De Niro and Al Pacino individually are cause for excitement among most movie fans. But to watch these two legends perform together in a cat and mouse police thriller is priceless.

Neil McCauley (De Niro) is a professional thief that does not wear a “Born To Loose” tattoo across his chest. Vincent Hanna (Pacino) is the dedicated cop assigned to catch him.

So, what happens when two of the best thespians collide for the camera? Non-stop entertainment, and one of film’s best police movies.

The last scene of this popular drama will get you. Agent Kujan (Chazz Palminteri) grills Roger ‘Verbal’ Kint (Kevin Spacey) into telling him what went on aboard a cargo ship. This boat was caring dope (supposedly), exploded and left thirty people dead.

Great performances, and an even better plot, are what audiences will experience. The performance of Benicio Del Toro (Fred Fenster) will have you laughing aloud and playing his scenes over.

The Usual Suspects is a cop movie from the 90s that has grown in following just as much the legend that was Keyser Söze.

This movie explores crime in the Big Apple. Dedication to his NYPD badge is what Jimmy “Popeye” Doyle (Gene Hackman) is all about.

He’s not the most politically correct police officer (racism and abusive force are some of his flawed character traits) on the city’s payroll. Doyle has one goal in mind: Track down the heroin source coming into the city and stop it. This film was so influential, it became the benchmark for cop movies for many years.

Yes, a guy named Popeye stars in one of the best cop movies of all-time.

#6 on our best cop movies list is In The Heat of the Night. Race relations in America during the sixties was tense to say the least. Norman Jewison directed Sidney Poitier (Virgil Tibbs) and Rod Steiger (Bill Gillespie) as they attempt to solve a murder mystery in small town Mississippi.

But before they work together as partners, Tibbs finds himself the prime murder suspect (it’s discovered later that he is a highly regarded Philadelphia police detective). Inexperienced with murder crimes, Chief Gillespie begrudgingly enlist the aid of Tibbs in solving this classic whodunit.

When you think of cop buddy movies, In The Heat of the Night won’t necessarily be your first thought. However, after watching it you must agree it’s one of the best police investigation movies ever made.

#5 on our top 10 cop movies list is The Fugitive. Wrongfully accused of murdering his wife, Richard Kimble (Harrison Ford) escapes the law to find her killer and clear his name. Right on his rear is Deputy Samuel Gerard (Tommy Lee Jones), and his team of U.S. marshals.

Gerard is just that type of law enforcement officer–he will not rest until Kimble is captured. As Richard leads the team through a series of intricate chases, he discovers the secret behind his wife’s death. But he must expose the killer before time runs out.

The Fugitive is one of the most entertaining, riveting, and successful cop movies of the 90s.

#4 on our top 10 cop movies list is one of Bruce Willis’ best. Officer John McClane (Willis) is on vacation in Los Angeles with the intent of seeing his estranged wife. However, he runs into a slight problem–a heist.

In a crazy set of events, McClane finds himself fighting multiple terrorists armed with heavy artillery. What does our hero John have? A revolver. And if that’s not enough, he’s being threatened by the least intelligent police commander around.

Bruce nails the good cop role. So much so that a total of five namesake movies have been made in the franchise.

#3 on our top 10 cop movies list is the great Fargo. The Coen Brothers, and top-notch acting by Frances McDormand and William H. Macy, guarantee the goods. The famous movie producing duo has created some film greats, and their 1996 comedy Fargo keeps things going.

Audiences follow Marge Gunderson (McDormand), the locale police chief investigating a string of homicides during the Northern winter, and car salesman Jerry Lundegaard (Macy). Lundegaard has hatched a plan to have his wife kidnapped for ransom. Watch as things quickly go from bad to worse.

Between the heavy Wisconsin accent of Officer Marge and the kooky goons hired by Jerry, Fargo is the best in funny cop movies that you’ll watch.

#2 on our top 10 cop movies list takes us to the City of Angels–Los Angeles. L.A Confidential tries to answer who is Rolo Tomassi? The figurative character that everyone is after.

A great ensemble of actors: Crowe, Spacey, Pearce, DeVito, and others, reel us in for two hours as they try to answer that question. Based partly on true events during the 1950s

Follow the L.A.P.D. in its early years as it attempts to go head-to-head with organized crime. On a police department full of corruption one cop, Ed Exley (Guy Pearce), makes a play to change things–even if it means losing in the popularity contest among fellow officers. The storyline and nonstop action will keep you intrigued.

LA cop movies as good as this one is rare.

Famous cop movies don’t get that way without superior acting, direction, and story. Chinatown has the trifecta. But can this film be considered a top cop movie if our main character isn’t a police officer but a private investigator? Yes, because he used to be which is close enough.

We guarantee this twisted merry-go-round will keep you guessing all the way until the end. Jack Nicholson is literally a glutton for punishment as he refuses to quit his search for the truth.

How else would he earn that bandage on his nose? Performances by John Huston, Faye Dunaway, and Jack Nicholson are nothing short of perfection.