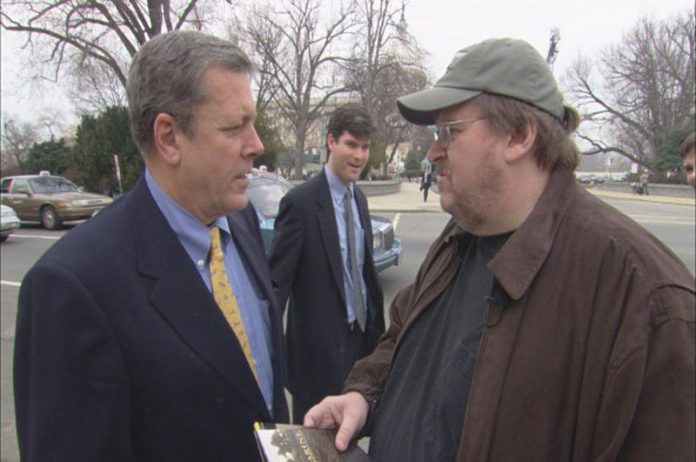 #10 on our top 10 documentaries list is Man on Wire. On August 7, 1974, Philippe Petit decided to squeeze every molecule out of his life.

Suspended between the Twin Towers of the World Trade Center, Petit walked from one building to the other. This documentary will show you how he planned the “artistic crime of the century.” This film will breathe life into your lungs like none other.

Cast: Philippe Petit (as himself)

The film follows Brian Steidle, a man whose entire career has been military-based. In fact, he served as a USMC captain. And when he left the military, Brian accepted a contract position in Sudan.

Now with the Joint Military Commission he was an integral part of the North-South ceasefire. Steidle rose through the ranks from a team leader to senior operations officer. After seven months he was invited to Darfur, where he served as an American representative for the African Union in that region.

#8 on our best documentaries list is a boxing movie starring arguably the greatest boxer ever. Do you want to know who the real Muhammad Ali was? Undoubtedly, this documentary will do just that.

Beginning with boxers Muhammad Ali and Foreman coming to the politically unstable African nation of Zaire for what Ali called the “Rumble in the Jungle”. This a world championship fight like no other.

Documentarian Leon Gast flew to Zaire to film both the fight and a music festival (featuring B.B. King, The Pointer Sisters, and Miriam Makeba) organized by promoter Don King.

Next up on our top 10 documentaries is F for Fake. A film by legendary filmmaker Orsen Welles. He tells this story through a combination of documentary and staged footage. Illustrating the deception behind all filmmaking, even that of a supposedly nonfiction variety, is his goal.

Welles openly manipulates this footage, using it as foundation for his own commentary. He argues that there is an extremely close relationship between art and lying. In other words, citing instances from his own career.

Do you like chess? If so, one of the best documentaries on Netflix is Brooklyn Castle.

It has been said that learning to play chess increases critical thinking. If that’s true, these kids will become the city’s finest thinkers. Brooklyn Castle is the improbable true story of I.S. 318 in Brooklyn.

The school, where 65% of students live below the federal poverty level, has the highest ranked junior high chess team in the nation. An incredible story of defying odds, stereotypes, and the competition.

These kids are chess masters and come in at #6 on our top 10 documentaries list.

The film argues that President George W. Bush and his inner circle used the media to further an agenda that exploited the 9/11 attacks.

If you told America that the financial catastrophe of 2008 was avoidable, most people would not believe it. Perhaps it was the estimated $20 trillion dollar cost.

Inside Job does a dynamite job of exposing the truth behind the worst economic meltdown in decades. For example, the film’s research uncovers how millions of homeowners lost both their jobs and their homes. In addition, interviews with politicians, financial heavyweights, journalists, and layman, takes us into the trenches.

The best documentaries to stream on Hulu or Amazon Prime share a problem or shedding the light on one. And this one is no different. Waste Land is filmed over three years and follows renowned artist Vik Muniz as he journeys from his home base in Brooklyn to his native Brazil.

It is here that we will find the world’s largest garbage dump, Jardim Gramacho, located on the outskirts of Rio de Janeiro. There he photographs an eclectic band of “catadores”. Muniz’s initial objective was to “paint” the catadores with garbage.

With climate change, food shortage, and a host of other issues, turning the world’s trash problem into art earns Waste Land a spot on our best documentaries to watch list.

Does it seem like there are more documentaries streaming about the dangers of some food consumption than any other subject? For sure there are a few, but Food, Inc. might be one of the best.

In the never ending vain to make a dollar, food conglomerates and special interest groups do whatever is necessary to get chemically manipulated, and scientifically modified foods in our hands quickly.

Emmy Award-winning filmmaker Robert Kenner offers his eye-opening documentary as a life choice rather than mere entertainment. What really is the state of our corporate farming in the United States, and why is it having such adverse effects to our health? Watch, listen and learn from narrators Michael Pollan and Eric Schlosser.

Why is Michael Moore’s Bowling for Columbine our best documentaries of all time pick? Because he’s been trying to get us to wake up for decades.

The second amendment to the Constitution cost more than 16,000 American lives yearly. But Michael Moore’s breakout documentary movie goes much deeper–he is looking for answers to it all.

So, what’s with our never-ending love affair with firearms? Can U.S. violence, the highest murder rate in the world, be reduced? And why do other countries, both larger and smaller, have a fraction of the gun owners found in the U.S.?

With his trusty camera, Mr. Moore helps us get the answers to some of the most pressing questions facing Americans today.