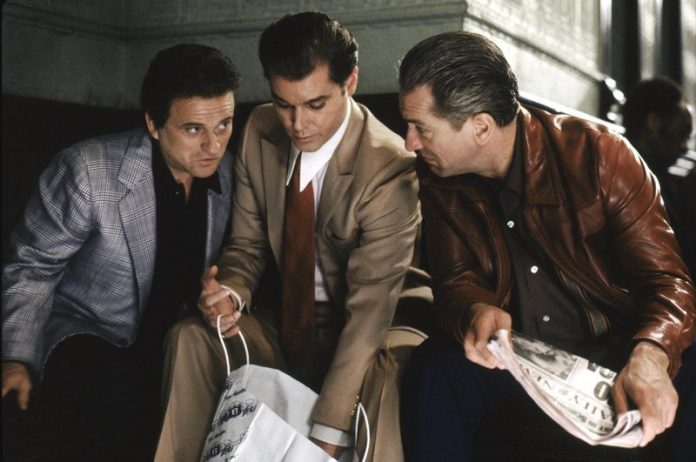 No top 10 gangster movies list would be complete without the excellent acting of Christopher Walken. The crime boss bullies his way to the top of the underground drug heap only to share his money with the poor.

Other than Walken, can you picture someone else in this role? His on-camera charisma and the childish antics of his sidekick (Laurence Fishburn) are interesting to say the least.

The pressure is on. The Movieplenty list of best gangster movies all time is just getting started.

His job is to consolidate the mob’s gambling business, and everything is going to plan until she walks in. Virginia Hill (Annette Bening) stops Benny Siegel in his tracks. The gangster soon forgets about his wife, children, and everyone else.

But don’t worry, our 90’s classic doesn’t turn into one of those old mafia romance movies. Tough guys rule here. Undoubtedly our ride must come to an end, but not before Ben makes quite a name for himself.

We’re not sure if it’s the ear slicing scene or the opening credits in slow motion that grab our attention. Perhaps it’s the keenly arranged score that nails it for Reservoir Dogs.

A group of small-time thieves are assembled to pull off the perfect diamond robbery. But things get messy–quite literally. One of the robbers is an informant for the cops, which creates big problems among this crew.

This bunch is not to be trusted when things are hunky-dory, and when there’s drama? Wait and see what happens when a bank shootout spills out onto the midday streets.

#7 on our top 10 gangster movies list is The Public Enemy. If you’re going to be a tough guy, you can’t visit your family every Sunday. It just doesn’t work.

Tom Powers (James Cagney) and Matt Doyle (Eddie Woods) are a couple of young hoods trying to survive the rough streets of Chicago. They quickly graduate from petty stickup men, to wanted killers.

No longer nameless, the entire criminal underworld is now gunning for them. Despite the hardcore reputation Powers has built, enemy gangs come for him–and they’re good.

Denzel Washington breaks away from the goody two-shoes characters of military men and law-abiding figures of the 90’s. His starring role in American Gangster makes this perfectly clear–Washington is a sly black gangster.

Frank Lucas (Denzel Washington) pays his dues as a chauffeur for one of Harlem’s leading black gangstas. After his boss dies, Lucas uses his street smarts and ambition to become one of the city’s most powerful crime bosses.

But lurking in the background is veteran cop Richie Roberts (Russell Crowe). Richie discovers a crack in the Lucas power structure and devotes his life to bringing the drug kingpin down.

Coming in at the halfway spot on our list of top 10 gangster movies is The Departed. Although we’re not crazy about some of the casting choices made in The Departed, the storyline will keep you engaged.

Sullivan takes his inside information and reports it back to Costello. When both organizations learn that they have a mole in their ranks, Billy and Colin race to uncover who it is.

Old gangsta movies like Little Caesar made the way for the gangster films of today. In this top gangster movies entry, the boss is Caesar “Rico” Bandello (Edward G. Robinson). An aspiring small-town thug, Caesar relocates to Chicago to make it big.

No gangster is without a right-hand man, and Caesar’s is Joe Massara (Douglas Fairbanks Jr.). Rico’s reputation grows quickly, but his partner Joe decides to leave a life of crime for show business. The story comes to a head as the two vastly different worlds collide.

What makes Goodfellas one of the best mob movies of all time? Fellow gangsters Robert De Niro, Ray Liotta, and Joe Pesci, the narration of Henry Hill, and the cat and mouse chase of the FBI obviously.

More violence than some of the other mafia movies on our list, but that shouldn’t turn you away. Scene-stealing performances by Pesci and Liotta will bring out your inner mobster, as you recite lines over and over.

#2 on our top 10 gangster movies list is a Francis Ford Coppola classic. No matter whose movie list you read, The Godfather is most likely going to reign supreme.

Not only is it one of the best mafia movies ever made, but The Godfather is arguably the best movie ever made. Acting greats Marlon Brando, Al Pacino, James Caan, Robert Duvall, Diane Keaton, and more create an American gangster film that actors, writers, fans, and others can revel in, borrow from, and attempt to replicate.

If you haven’t seen this classic, prepare to be amazed.

Tony Montana (Al Pacino) is far from Italian in this movie, but the finished picture is pure delight. Pacino makes his character come alive like few gangsters before or since. His ambitions and dreams are larger than life, and he’ll stop at nothing to realize them.

Scarface begins with Tony agreeing to kill a political figure in Cuba in exchange for a green card. Quite a crime to commit, but Montana views it as a mandatory step in reaching American soil. Once he arrives, his unquenchable desire to have it all takes him the rest of the way.