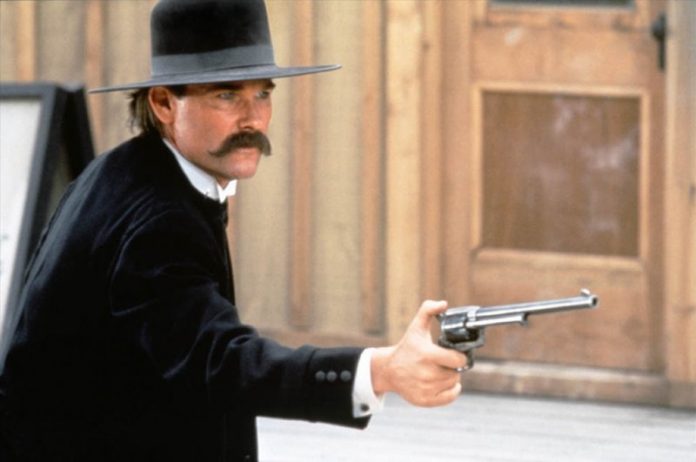 First on our list of top 10 movie shootouts won the Academy Award for Best Picture. Bardem, Jones, Brolin, and Harrelson, and the Coen Brothers join forces to bring us No Country for Old Men.

A very entertaining film that follows Llewelyn Moss (Brolin) after he discovers a satchel of money from an apparent drug deal gone bad. The guns come out and a chase ensues immediately after he finds the cash.

Moss is more than willing to risk his life for the dead presidents, but he is hunted down by a force bigger than he is.

What’s not to love with Warren Beatty, Faye Dunaway, Gene Hackman, and even funny man Gene Wilder? A great firefight that consists of bank robberies, car chases, and dodging the law.

Most moviegoers will want the Clyde Barrow gang to continue robbing banks and avoiding being captured forever. But it’s the inevitable bloodbath at the end that saddens us all.

Next up is a popular release from the nineties. This frequently quoted western is the story of the famous lawman Wyatt Earp (Kurt Russell). Wyatt attempts to settle down and build a life for himself, his wife, and his family.

This fantasy is disrupted by a band of unruly characters known as cowboys. But Wyatt is not going to let a few hooligans alter his plans.

With the help of his brothers Virgil (Sam Elliott) and Morgan (Bill Paxton) they pick the cowboys apart one by one. But they would not have been able to do so without the help of Doc Holliday (Val Kilmer).

How many movies has Natalie Portman been in? A lot! But none with the heavy artillery found in Léon: The Professional.

And it’s not just the spectacular gun melee at the end, there are many things to like about this movie. Fans will enjoy the twisted multi-personality of Gary Oldman, the disciplined yet neurotic behavior of Jean Reno, and the crooked antics of Danny Aiello.

You know the theme music, (one of the most popular of any western), you know the director, (Sergio Leone), and you know the main star, (Clint Eastwood). The display of marksman skill near the beginning of this showdown feature is just as good or better than anyone found on this list.

If it’s a cowboy picture from the 60s, it was most likely a spaghetti western by Italian director Sergio Leone. These low-budget flicks produced in Europe featured gunfights like the many in The Good, The Bad, and The Ugly.

The sets are complete with bullet ricochet noise and dramatic closeups. To watch Eli Wallach and Lee Van Cleef go at it with blondie is magnificent.

You’ll be hard-pressed to find another film more influential to the action genre than this quintessential film by The Wachowskis. Imagine waking up the day after learning that the world – as you know it – is not real, having the ability to dodge bullets, and being told you are the only person that can save humans from extinction.

The Matrix is an action movie that delivers non-stop thrills and ammunition for days!

“Say hello to my little friend.” Al Pacino has had a brilliant career playing one great character after another. This movie line, and many others in the picture, have become a part of pop culture. You’ll see an epic gun battle where Tony Montana takes on what seems to be a mini-Cuban army by himself.

The Paul Newman and Robert Redford classic is essential for any list with revolvers. The notorious bank robbers are outgunned and outdated as they try to continue pulling of bank robberies. They are chased like cattle out of the states and find themselves south of the border where the next life greets them.

Follow the lives of early 1950’s policemen in Los Angeles from multiple points of view as they try to fight and solve crimes. There are a few showdowns in this terrific cop movie, but the one we like the best is at the end.

Officer Exley (Guy Pearce) and Officer White (Russell Crowe) find themselves surrounded by numerous gunmen and no backup as they pull off the best shooting of their careers to save their lives.

#1 on our best movie shootouts list is Heat. You almost forget the other big stars in this movie: Natalie Portman, Jon Voight, and Ashley Judd after watching the solid drama of Robert DeNiro and Al Pacino.

The storyline is predictable–cool crooks and corny cops. We root for the cool crooks, but the corny cops we probably prevail. The gun battle midway through this picture is one of the best you’ll likely see.