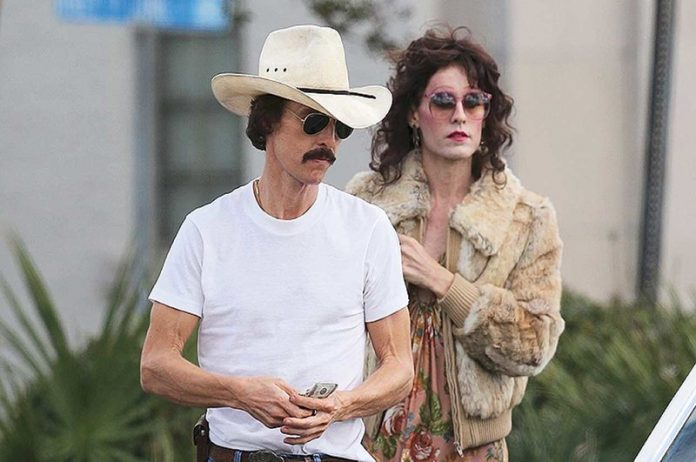 Although he’s a fugitive, Mud’s goal is to win back his ex. Not a normal goal for a man wanted for murder, but his love is Juniper (Reese Witherspoon). Ellis, who is suffering form his own heartbreak, agrees to help Mud. He and Neckbone do all they can to protect Mud and reconcile him with Juniper.

Not necessarily a love story, but this is one of the best films of 2013. And you will root for old Mud.

If you haven’t gotten the memo, technology has taken over our lives. This is apparent in tech leaning Her.

Spike Jonze directs Theodore (Joaquin Phoenix) a sensitive man who earns a living by writing personal letters for others. Heartbroken after his marriage ends, Theodore becomes engrossed with a new operating system which reportedly develops into an intuitive and unique entity.

He starts the program and meets “Samantha” (Scarlett Johansson), whose bright voice reveals a sensitive, playful personality. Can one fall in love with a computer program? Yup, apparently so.

More than just another picture about the music biz, 20 Feet is the untold story of the other voice we hear with every song on the radio–the background singer. Millions know the song and the sound, but the name of that second singer is a little more challenging.

Award-winning director Morgan Neville shines a spotlight on the untold story of the backup singers behind some of the greatest musical legends of the 21st century. No best movies 2013 list would be complete without this film humming along in the background.

If you can get past the always smirking George Clooney, you will enjoy the work of director Alfonso Cuarón. Of the popular 2013 movies on our list, Gravity is the most suspenseful.

Dr. Ryan Stone (Sandra Bullock) is a medical engineer on her first shuttle mission. And her commander is veteran astronaut Matt Kowalsky (George Clooney), helming his last flight before retirement.

During a routine spacewalk disaster strikes and the shuttle is destroyed. Left in deep space with no link to Earth is Ryan and Matt. As fear turns to panic, they realize that the only way home may be to venture further into space.

Right before the middle of our top 10 movies of 2013 countdown is The Wolf of Wall Street. The winning collaboration that is Scorsese and DiCaprio, continue to produce good movies.

In this top pick of 2013, we follow Jordan Belfort (Leonardo DiCaprio) on his journey from an entry-level job at a Wall Street brokerage firm to founding his very own firm, Stratton Oakmont. Jordan’s band of misfits include Donnie Azoff (Jonah Hill), Brad Bodnick (Jon Bernthal), and “Mad Max” Belfort (Rob Reiner).

What follows is a non-stop thrill ride–complete with drugs, money, and obscenity. Wolf is worth a look and one of top movies of 2013. If you don’t pass out first.

Though he once spent time in San Quentin, 22-year-old black man Oscar Grant (Michael B. Jordan) is now trying hard to live a clean life and support his girlfriend (Melonie Diaz) and young daughter (Ariana Neal).

Flashbacks reveal the last day in Oscar’s life, in which he accompanied his family and friends to San Francisco to watch fireworks on New Year’s Eve, and, on the way back home, became swept up in an altercation with police that ended in tragedy.

Irving Rosenfeld (Christian Bale) dabbles in forgery and loan-sharking, but when he falls for fellow grifter Sydney Prosser (Amy Adams), things change in a big way.

Caught red-handed by FBI agent Richie DiMaso (Bradley Cooper), Irv and Sydney are forced to work under cover as part of DiMaso’s sting operation to nail a New Jersey mayor (Jeremy Renner). Meanwhile, Irv’s jealous wife (Jennifer Lawrence) may be the one to bring everyone’s world crashing down. Based on the 1970s Abscam case.

So, what makes movies of the great Gatsby style so intriguing? Is it the mystic

Midwest native Nick Carraway (Tobey Maguire) makes his way to the Big Apple in search of fame and fortune during the roaring 20s. It’s hard to picture Spider Man in a movie like The Great Gatsby, by Tobey Maquire makes it onto the screen. And a very bright, over the top screen it is.

Nick is a writer waiting for his big opportunity, and he finds himself living next door to a millionaire.

The man with the cash is Jay Gatsby (Leonardo DiCaprio). And across the bay from both gentleman is Daisy (Carey Mulligan) and her cheating husband, Tom (Joel Edgerton).

It doesn’t take a wide-eyed Nick long to become enticed by riches. He has a front row seat to the deception after all.

We’ve reached #2 on our top 10 movies of 2013 list. In mid-1980s Texan Ron Woodroof (Matthew McConaughey) is shocked to learn that he has AIDS. Though told that he has just 30 days left to live, Woodroof refuses to give in to despair.

He seeks out alternative therapies and smuggles unapproved drugs into the U.S. from wherever he can find them. Woodroof joins forces with another AIDS patient (Jared Leto) and begins selling the treatments. Dallas Buyers Club deals with a heavy head on.

#1 on our top 10 movies of 2013 list deals with an ugly American truth: slavery. In the years before the Civil War, Solomon Northup (Chiwetel Ejiofor), a free black man from upstate New York, is captured and sold into slavery in the South.

Subjected to the cruelty of one malevolent owner (Michael Fassbender), he also finds unexpected kindness from another, as he struggles continually to survive and maintain some of his dignity.

Then in the 12th year of the traumatic ordeal, a chance meeting with an abolitionist from the North changes Solomon’s life forever.